Come and listen to us live! However, if the player does not work, select your player of choice, download and load the playlist. And the stream should begin shortly after the Parental Advisory Warning.

We love to share our show with our listeners. So come and join us for some pie and the beverage of your choice. And please don’t forget to say hi. Because I promise we don’t bite. Much. 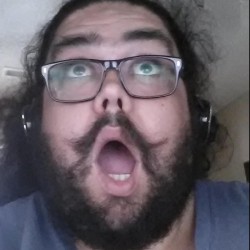 Producer at Busy Little Beaver Productions
Mike Medeiros is a great storyteller in his own mind. He’s been known to put words to page and sometimes, he even turns them into audio stories for himself, his friends and the occasional stranger that stumbles upon his stuff by accident. He has written, writes, and will write for Gates of Sto’vo’kor, Blood of the Neirrh, Star Trek: Starfinder, The Klingons of Long Island, Reality’s Edge, and Zygerus. Some of his stories and other writings have materialized on websites and forums for the G & T Show, Priority One, ScienceFiction.com, Star Trek Online, and even Star Trek.com. He’s written a few playable missions for Star Trek Online and has even had a couple of them spotlighted. He keeps saying he’s working on a novel, but is he really? A comic book is more likely. If only he could make money flinging ink at the screen, he’d be a happy camper.

He is the co-owner of Busy Little Beaver Productions and is the producer and co-host for G & T Show and Gates of Sto’vo’kor. He’s directed voice actors, and produced and edited audio podcasts and dramas because he doesn’t have the face for video. He plays well with others and is always on the look out for the next project, the next thing, the next next. If he wasn’t working on something with a half dozen other projects waiting in the wings, somebody please check to make sure he’s still breathing.

During the day, he’s a mild-mannered computer repair man who dabbles in web design in his small, rural, Central California community. He lives with his lovingly dysfunctional family and loyal canine companion and spends most of his time in the closet concocting some hair-brained scheme or another. He’s got an unhealthy obsession with Lego video games, Klingons, and Star Trek Online that borders on the neurotic.

Despite all this, he still finds the time to write the words. Find out what he's doing here.